KoKoDo JuJutsu is a defensive martial art that specializes in using an attackers energy against him by off-balancing, joint manipulation, throws and pressure points.

It emphasizes a series of prearranged techniques (Kihon Waza). These are model attacks and defences in which each student knows what action the other will take and no major alterations are made.

Learning objective is to be able do defend yourself through increased coordination of automated movements as well as finding your own inner balance due to the resulting awareness. KoKoDo JuJutsu is an integrated mind-body training on the basis of a unified training system. An old japanese saying is: "The wisest warrior is the one who can make an enemy become a friend." 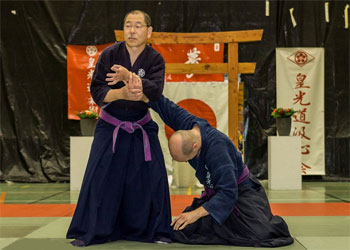 The basic techniques are nescessary to be able to understand and use variable techniques (Henka Waza) that are effective against all kinds of attacks. Training also includes defensive techniques against weapons such as a knife (Tanto) and a stick (Hanbo).

There are various levels in this system.

The first levels are the so called Kyu levels:
6.Kyu (white belt) to 1. Kyu (brown belt).

The last two levels can only be received and authorised by the founder Yasuhiro Irie in the KoKoDo Hombu Dojo in Japan.
The belt colour for the last two levels are purple, in KoKoDo JuJutsu this represents the highest rank.
This colour also stands for faith and honour in Japan. 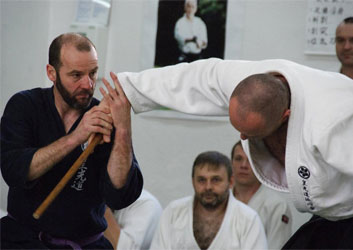